Hpaula Gam Hpang: ‘I Tried to Find A Way for IDPs to Return Before Anyone Came to Help’ 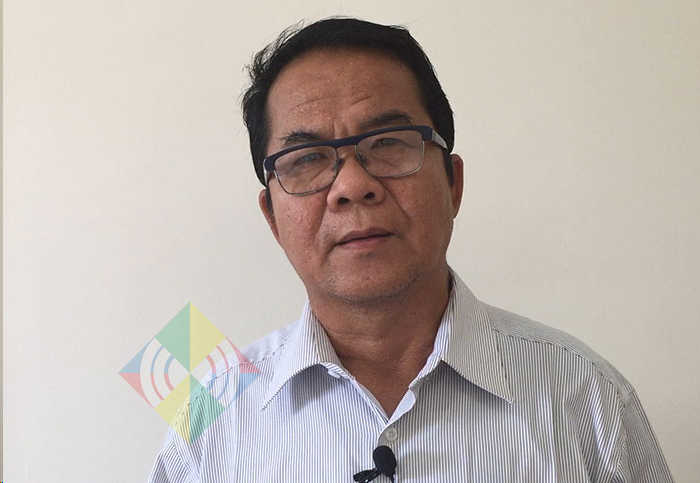 KNG speaks to the Kachin singer and songwriter who negotiated for IDP return with the Tatmadaw.

Nearly 280 people from 46 displaced families in camps across Kachin State were recently able to go back to Nam San Yang village in Waingmaw Township, escorted by the Burma Army. Noted Kachin singer and songwriter Hpaula Gam Hpang played a role in negotiating their return between the Burma Army, the government and the IDP community regarding their return. KNG spoke to him about this experience, the current situation on the ground, and future plans for further returns.

How did you get involved in helping IDPs return to Nam San Yang?

Two to three Nam San Yang villagers told me on November 6 last year to communicate with the respective authorities. I am a Bhamo native. I thought that this was an important issue and knew that landmines were already there [in the village]. I was also afraid of this. I went to Myitkyina on November 8. I sent a letter to the headquarters of the military’s Northern Command. I asked the villagers, ‘are you sure you really want to go home?’ The villagers told me that they really wanted to go home. After that, their dream came true. I want to tell you that I didn’t offer first to facilitate their return. It’s not the first time for me to help IDPs. I have helped IDPs since 2011. As a singer, I tried to sing for them. I worked with other artists to help IDPs. I would like to say that I am helping IDPs because I love all people, even though I don’t always have enough knowledge about how to do it.
image.png

Please tell us more about the second returning group of IDPs to Nam San Yang.

Twenty-nine families returned on March 5. The first batch of the returning IDPs was 17 families. Therefore, a total of 46 IDP families have already returned. Among these 29 returned families, only seven families can live in their own homes. The 22 families’ houses were damaged during the clashes, so they cannot stay in their own homes. Currently, they are staying in the Catholic Church and the Buddhist monastery. Some of them are staying with people who came back in the first batch of returnees.

How many people returned in this group?

There were about 180 people.

What kind of assistance was there from the government?

Where do these IDPs live and what camps did they come from?

They are Nam San Yang villagers, who took refuge in Waingmaw Maina camp and Ngwi Pyaw Sanpya camp in the Myitkyina area. Some are from Bhamo. I think some of them are from Jeyang [in the China-Burma border area]. I don’t know the exact details.

What has the government done for the IDPs since they returned?

A permanent health worker has been appointed for them. The health worker is rotated every month. They [the authorities] have done a ground survey for a communication tower. They have been preparing for it.

We have learned that landmines were removed only inside the village at the end of January. How is the situation in Nam San Yang now, regarding security?

They [the Tatmadaw] are still looking for concealed landmines. I was with [Burma Army] forces who were to searching for landmines in the village as well as in the residential compounds. They tried to look for landmines everywhere in the village, such as on the ground near the water well, on the cow farm, in the toilet, and inside and outside the houses. They cleared brush with a bulldozer. Security is really good for [those who returned home]. Nam San Yang village is located on the road to Laiza [where the Kachin Independence Organization is based]. In the past, the eastern part of the vehicle road was completely blocked. Now it’s open. They have done landmine removal even on small paths in the village. As a second phase, they [Burma Army troops] are going to search for landmines outside the village, in paddy fields, gardens and along the road heading to paddy fields. They are trying their best to better the security in the village.

Now summer is coming. Do the authorities have a plan in place for education of children in the community?

They are going to fix the existing school building for the coming 2019-2020 academic year. Respective government officials already came and observed the situation. School will continue to operate as usual. Construction engineers came to calculate the measurement of a planned hospital. They are going to build a hospital. They are also trying to set up village administration office. Currently, there is only village administrator there. We are helping the village headman.

In addition to the government’s social relief and resettlement department and the military, have any other organizations come to help?

We have also learned that the Kachin Humanitarian Concern Committee [KHCC] has been working for the safe return of IDPs. How have you worked together with them?

I expected this kind of organization [to be involved] when IDPs began to talk about returning to Nam San Yang village. We have had some difficulties working together. We are trying to seek the best way.

I used to tell the villagers that I was like Saya Yaw Han [John the Baptist] in the Bible, who talked about Jesus coming. I tried to seek a way for the return of IDPs to Nam San Yang village before anybody came to help us. I hope this organization [KHCC] will do better on a national level. It’s very good. I support it.

Will you lead the next batch of returning IDPs or will you allow KHCC to handle it?

We haven’t had any face-to-face meetings. I have just heard of KHCC by name. I want to meet them. I want to explain to them about [the situation in] Nam San Yang. If they take responsibility for all the IDPs in Kachin State, I think it will be better for Kachin people.

Are you collecting a list of IDPs for the next batch of returnees?

I’ve heard that there are many IDPs who want to return to Nam San Yang. According to the village administrator, there are about 50 families on the list.

Up until now, we have just been helping the IDPs who really want to return. In my opinion, the important thing is that we try to seek a way back to our villages and to work in our area, regardless of who leads it—even firefighters or the GAD [General Administration Department] or the Tatmadaw. We want to go home. Now, the Burma Army is leading in implementing this. They won’t work for long. It’s short-term. This organization [KHCC] will likely handle it. The Burma Army may continue to [facilitate the return of IDPs] around three more times.

This interview was lightly edited for clarity.