All ethnic groups believe that only negotiations on the terms of the Panglong Agreement based on self-determination, federalism and ethnic equality will resolve the ethnic conflict in Myanmar. However, there is no cohesive plan or body that represents all armed groups.

United Nationalities Federal Council, the most active ethnic alliance, emerged with the lead of KIO in 2011 but does not represent all ethnic armed groups. After the emergence of the UNFC, the U Thein Sein government tried to gain peace with the UNFC. The UNFC tried to negotiate a Nationwide Ceasefire Agreement (NCA) with the U Thein Sein government by establishing a Nationwide Ceasefire Coordination Team (NCCT). After discussion with the NCCT and government negotiation team, the Union Peace-making Work Committee (UPWC), NCA emerged as a result. The UNFC decided to sign NCA all-inclusively in November 2013 at the Ethnic Armed Organizations Conference in Laiza. However, the U Thein Sein Government did not allow the Arakan Army(AA), Palaung State Liberation Front(PSLF), and the Myanmar National Democratic Alliance Army(MNDAA) from UNFC to sign the NCA.

The Northern Alliance was formed with the ethnic armed groups that have refused to sign the NCA in 2016. It is a military coalition in Myanmar composed of four ethnic insurgent groups: the Arakan Army (AA), the Kachin Independence Army (KIA), the Myanmar National Democratic Alliance Army (MNDAA) and the Ta’ang National Liberation Army (TNLA).

FPNCC, the most powerful ethinic armed group, was formed to negotiate with the government by the leading of Wa. Wa is the biggest ethnic armed group that refused to sign the Nationwide Ceasefire Agreement (NCA) and formed the Federal Political Negotiation and Consultative Committee (FPNCC) by cooperating with other ethnic armed groups (EAOs) which have not signed NCA. 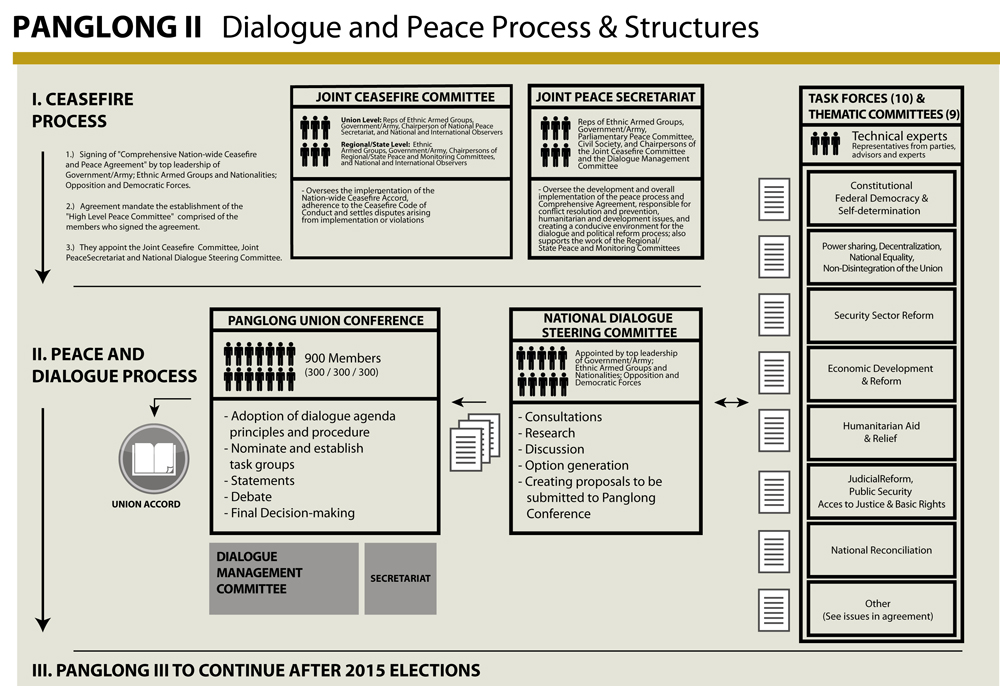