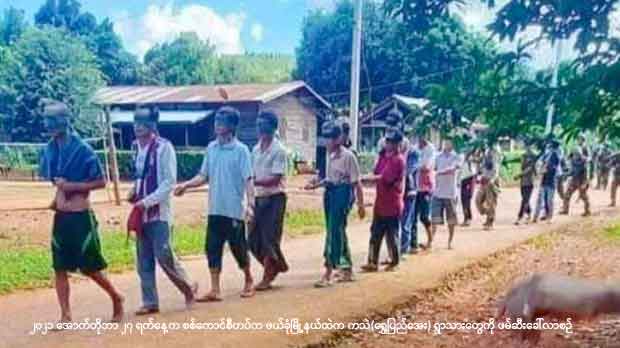 In the wake of the coup, the military council is abducting more women to be used as porters and human shields in some conflict-affected ethnic states, according to the women organizations and human rights activists.

Especially, there is an increase in abductions of not only men but also women to be used as human shields, in the conflict-affected Karen and Karenni States.

Naw Say Say Heh, Joint Secretary-2 of the Karen Women Organization (KWO) said: “After the coup, Karen State sees an increase in abductions of women. They (soldiers) abduct women as hostages and guides. Because they fear that they may get shot. They abduct them as human shields. The military asked the female detainees to carry the rice and other materials weighing about 10 kilos. The soldiers beat the women with gun butts if the women say they could not carry materials.”

However, it is difficult to compile the exact number of the women who are abducted to be used as porters and human shields.

Saw Nanda Sue, Spokesperson of the Karen Human Rights Group (KHRG) said: “According to our findings, the number of such cases is said to become high. In 2021, we recorded two or three cases. It continues in 2022. That’s why, the number of the cases has increased.”

The military council troops are abducting locals mostly in the conflict-affected Brigade-1 Thaton (Duthahtoo District) of the Karen National Union (KNU), Brigade-6 Myawaddy (Dupalaryar District) and Brigade-5 Hpapun (Mutraw District) in Karen State, to be used as porters and human shields. Take a look at the abductions of more than 400 villagers in Brigade-1 territory in September last year, the military forced women to carry rations and ammunition. In addition, the military used the women as guides in Brigade-5 territory. Such cases were reported in Brigade-1, 5 and 6, Saw Nanda Su added.

In the second week of May, a combined force of the military council and the Border Guard Force (BGF) abducted more than 90 locals in Bilin Township in the KNU’s Brigade-1 territory (Thaton District), the KHRG says. The detainees have not been released till May 23rd.

Zu Zu, Joint Secretary-1 of the Burmese Women’s Union (BWU) said: “The military arrested women while growing paddy and going to the farms. Most men also face it. Among the detainees are women. We found it in Karenni State, according to the statements and surveys of some CSOs. It was common in the conflict-affected areas. We hardly heard of cases in the states where there were no civil wars. However, we have heard the increase in abductions of the people to be used as porters and human shields, are reported in the wake of the coup.”

The military’s abductions of locals are also reported in most of the conflict-affected areas in Karenni State.

In addition, the military council is carrying out the arrests of female staff who have joined the Civil Disobedience Movement (CDM), the searches of the groups and organizations which are providing health care and food rations for the refugees and the abductions of other family members when the wanted persons are not present at the houses, in Karenni State, Zu Zu added.

The spokesperson of the military council is unavailable for comment.

Such cases are the human rights violations committed by the successive military governments, according to the Karen Women Organization (KWO).

The number of such cases have declined after some Ethnic Armed Organizations (EAOs) signed the State Level Ceasefire and the Union Level Ceasefire in 2012 and the Nationwide Ceasefire Agreement in 2015, human rights activists say.

In the wake of the coup on February 1st, 2021, the number of human rights violations against women has increased significantly in ethnic areas, according to the women organizations and human rights activists.

sent by the NMG.