During the run up to elections in April 2009, the government announced the BGF force scheme for all ceasefire groups. This rushed attempt to absorb ethnic militia groups into the national army meant these groups were required to give up most of their autonomy without the promised political discussions taking place.

After several extensions of the deadline, the definitive deadline expired in Sept 2010, after which the government announced all ceasefires “null and void”. The run up to and eventual breakdown in the first round of ceasefires saw the military step up pressure on ethnic militia groups.

politically: ordered the closure of all but two of the KIO liaison offices in government- controlled areas, barred a Kachin Political Party, KSPP, from registering and contesting in the 2010 elections, and referred to ceasefire groups as “insurgents” in the media.

militarily: attacked the MNDAA (Kokang) and captured their headquarters (August 2009), many militia groups reported military build-up near their outposts and some have even been attacked – the worse now being in Kachin state and Northern Shan State.

The government however changed its aggressive stance on August 18, 2011 when President Thein Sein pledged to make the ethnic issue a national priority, offering dialogue with all armed groups and dropping key preconditions for talks, namely the BGF requirement. Nevertheless the Border Guard Force scheme remains a part of the government’s peace plan and is listed as point 8 in the Union level peace negotiations’ 8-points: “To coordinate existence of only a single armed forces in accord with the Constitution”.

There is no official governmental document that defines their BGF policy. The people’s militia force is mentioned in the Defense Services, Chapter 7, of the 2008 constitution. However, the wording is vague and no details about the role of the people’s militia are provided.

340. With the approval of the National Defence and Security Council, the Defence Services has the authority to administer the participation of the entire people in the Security and Defence of the Union. The strategy of the people’s militia shall be carried out under the leadership of the Defence Services.

According to a report by the Network for Democracy and Development called “Civil and Military Administrative Echelon in Burma” (August 2011), the structure and organization of the Border Guard Force and People Military Group are detailed below:

Border Guard Force (BGF) is a regular military force and has a military structure like the Myanmar Army. Although the battalion commander is from the ethnic armed group, the Myanmar army is in total control over the activities of the BGF and work together during military operations.

The BGF has a total of 326 personnel of which 3% are Myanmar army soldiers, including commanding officers and other rank officers. Among them, 30 soldiers from the Myanmar army including officers work together with ethnic soldiers in the battalion and take important administrative positions in the BGF. 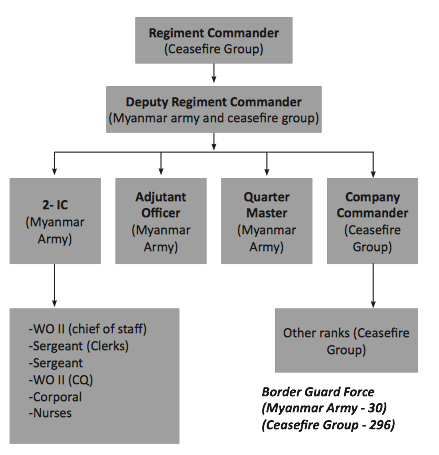 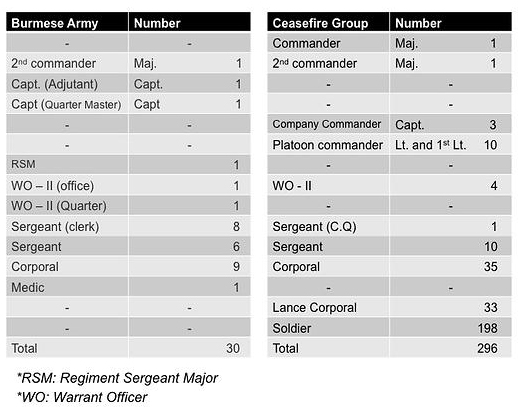 So far the major groups to have transformed into Border Guard forces and People Militia Forces are: NDA-K, KNPLF, MNDAA, Lahu Militia group, DKBA, KDA, battalions from SSA-N and SSA-S as well as splinter groups from other major groups.

Border Guard Force****Each battalion of the Border Guard Forces (BGF) has 326 soldiers, including 18 officers and 3 commanders (one from the Tatmadaw). BGFs are only deployed within its territory and paid the same salary as normal soldiers.

Regional People’s Militia group and Anti-insurgency group***Each group has less than 100 members and is under the control of Tatmadaw.